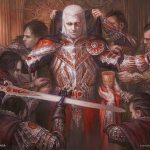 I have been a fan of Bleach since I was a teenager. It began after a friend of a friend explained "Hollow Ichigo" to me as "Bleach's Naruto's Kyūbi" and showed me an "Ichigo vs. Grimmjow" AMV. The rest, is history. I've read the manga all the way through dozens of times, though I don't think I've ever watched the anime all the way through.

I've been reading and enjoying the Wiki for years, and in the fall of 2019, after writing my fanon behind the scene, I decided to finally contribute. This is my first contribution to any WIKI so if my stuff appears amateur that is why!

"If only one side were clearly on the side of "justice", we would refer to this as self-defense or subjugation. But this is war. "War" refers to a conflict in which both sides fight for justice."
—Hidetomo Kajōmaru to Ryūnosuke Yuki at the onset of the Wandenreich Invasion

This quote, spoken by Hidetomo Kajōmaru, is not only my favorite Bleach quote but reflects my mindset when it comes to Fanfiction as a whole. I acknowledge that no single fanfic creator is "right." "Bleach Fanon" is a "war" where we are all fighting for what is right. Every author has the right to their interpretation of Kubo's material. I seek to fill his plot holes and develop his underdeveloped ideas in my way, but this by no means precludes my interest, belief, or support of other's attempts to do the same.

Toriko
Add a photo to this gallery
Retrieved from "https://bleachfanfiction.fandom.com/wiki/User:Tycho-REX?oldid=438068"
Community content is available under CC-BY-SA unless otherwise noted.