Shimenawa (注連縄,Enclosing Rope) is a unique ability awakened by Kaname during his youth. Shimenawa allows Kaname to form contracts with individuals, which requires a set amount of his energy depending on the individual in question. These contracts are broken into two different variation; a forced contract and an agreed contract. A forced contact is often used on enemies that are weaker then him or on those that he has defeated. An individual under a forced contract will follow his and cannot go against his commands. When forming an agreed contract the individual in question is able to move on their own without his approval and can go against his command. However, he is still able to forcefully command then individual. At anytime he is able to undo the contract, doing so often causes the individual to lose their memories of him and the time they were contracted. In addition to this, he has stated the it is easier for him to forcefully subjugate hollow due to his nature when other entities.

Regardless of the contract formed, a marking appears around the individuals neck, which is normally invisible to others unless invoked by him. Through the contract he is able to call his contracted entities to his side needed. Along with this, he is able to turn those who have a forced contract into objects that he can wear. This allows him to channel and use their abilities to some degree. While contacts are often used on spiritual entities, he is able to form one with a human weather they have a decent Reiryoku or not. When doing see, the individual becomes able to see and sense spiritual entities without given off any Reiryoku. In addition to this, should the individual posses a certain level of Reiryoku, they have a chance to awaken unique abilities of their own.

Following the experiments performed and the success of project ascension, the ability gained new functions. These new functions allow him to channel his power through his contracted subjects to empower them. As well as see and sense what they do and speak to them telepathically regardless of the distance between the two. He has also shown the ability to instantly teleport to them at anytime.

A Cinematic View: is a the fullbring of 「 」.

What Lies Beneath: is a the fullbring of 「 」.

Tenchi Kyōmei (天地共鳴, Heaven and Earth Resonance): is unique ability he is able to use and is often compared to that of a fullbring or a Quincy's Schrift}. The ability of the Tenchi Kyōmei is broken down into two aspects absorption and manipulation. Kaname's body is known to passively absorb and store pure Reishi, which he is able to use for various action. He is able to channel the stored stored energy with his left arm, manipulating the energy he is able to create blasts or create shields. Upon his time in the human world and obtaining his unique gigai, he has discovered another aspect of the Tenchi Kyōmei. Much like his ability to absorb Reishi, half of the food he consumes is broken down into pure unaltered Kishi energy; which stored within his body. Much like him channeling the Reishi with his left hand, he is able to channel the Kishi energy through his right arm. Manipulating this energy grants him the ability to heal small wounds of living creatures.

While both aspects of this ability has it uses after retuning to Hueco Mundo and his fight with「 」he has discovered a new function of his ability. This new function allows him to interweave his stored Kishi or Reishi into the environment around him. Due to this opposing nature of the two doing so is known to produce disastrous effects on the surrounding areas. Upon training with「 」he has became able to finely weave the respective energy into the environment to produce carious different effects and the scale depending on the amount energy used. Due to each one of his arms channeling a separate energy, when not uses his gigai he is has stated that should his two hands touch; it would cause a feedback and greatly damage his body.

Lucero delalba (ルセロ·デル·アルバ (明けの明星) Rusero· Deru· aruba, Spanish for "Morning Star," Japanese for "Lucifer"): Yōhime's Zanpakutō takes the form of a normal katana with red and black symbols running down the length of the blade. She stated that the symbols spell out a name.

Resurrección Special Ability: While in her Resurrección form Yōhime is known to be just as fast a Sano and stong. Using her wings she is able to fly as well as use them to shield against an attack.

Senkai Kurokami (殲景黒神, Slaughterscape of the Black God): Yōhime flaps her wings, this causes several black feathers to fall off. She then removes another feather from her wing she then throws the feather, she able to control the feather by just moving her hand. Upon contact with something the other feathers instantly travels to the location of the object. The feathers have been shown to be able to rip through stone with ease.

Kuro Ansokubi (黒安息日, Black Sabbath): To use she claps her hands together then says "Sleep is the night of the black sabbath". Upon hearing this, she and the oppoent are covered in darkness . Now much is known about what happnens afterwards due to her never telling anyone. Only stating that is someone knew they would die.

Jigokuken (地獄剣, Hells Blade): By manipulating the reishi around her body and infusing own energy into it. She is able to from dagger like blades around her and by swinging her zanpakutō, she is able to release the blades in a direction of her choice.

Daitenshi (大天使, Archangel) is the name of Yōhime's Mu ability it takes the form of a small female angel like being that is sits on the top of Yōhime's head. Daitenshi has shown the ability to speak as well as eat. Which Sano states is something he never though would be possible.

Kanki Special Ability: Shinespada (真十刃, Divine Ten Blades) is Daitenshi most notable attack. It takes the form of ten different swords. Each one possessing a different symbol on the blade. Daitenshi is able to wield each sword when in battle or use them by just calling their names. As of now only three swords abilities have been shown.

Kansei Kanki: Tenshinanayo (天使世七, Seven Generations of Angels) is the name given to her Shin Hanatsu. It is achivied by combining her Hanatsu with that of her Resurrección. While in her Resurrección form, she embraces Daitenshi. The two then kiss, which causes the two to begin glowing. Moments later the two merge into a single form, resembling a small child with black hair. Floating aroung the child are fourteen different crown like objects. Sano has stated that the child acts as an avatar for her real body, and that if she showed her true form it would destroy whoever looked at it.

Kansei Kanki Special Ability: Juuyon Tenshi (十四天使, Fourteen Angels): It takes the form of fourteen crowns that float around the child. Each crown has a different design, though each of them has a name as well as a number on it. However half of the crowns has a normal number and the half has a negative in front of the number. So far only two if the fourteen abilites have been shown. 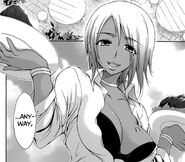 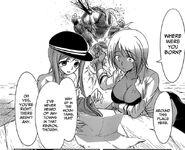 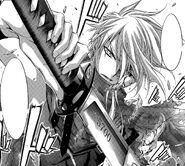 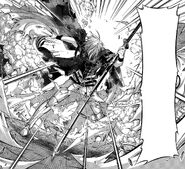 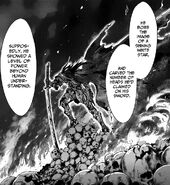 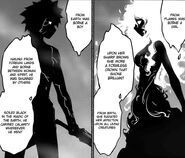 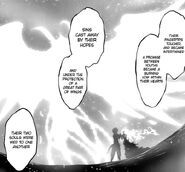 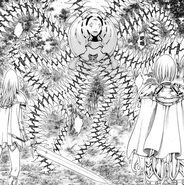 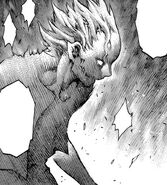 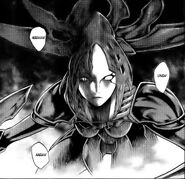 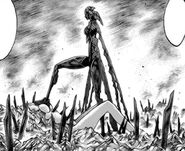 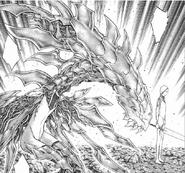 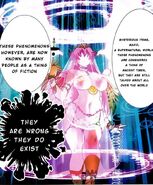 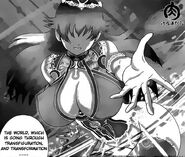 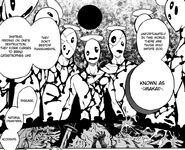 Add a photo to this gallery
Retrieved from "https://bleachfanfiction.fandom.com/wiki/User:OmniKaiser/Sandbox?oldid=437934"
Community content is available under CC-BY-SA unless otherwise noted.