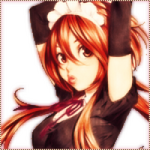 There's not much to me...I'm 17, female, still in high school, and am a random, sarcastic, cynical girl. ^.^ So beware... -.- I like pickles and vanilla wafers and those animal crackers with the pink and white icing. The regular ones suck. I used to read a lot of manga but have stopped. My list of anime that I've watched is not really impressive, it consists of Yu-Gi-Oh!, Pokemon, Digimon, Kare Kano, Sailor Moon, Bleach, Emma: A Victorian Romance, 11eyes, Angel Beats, and I've started watching Lupin III. There have been tons of anime that I've begun watching, but have abandoned for who knows why.

I might be considered as addicted to Bleach, not sure. I keep up with the manga every week, and watch both the subs and dubs. (Amagai arc, I began watching the subs, oh, I dunno, beginning of the Fake Karakura Town arc). My favorite character in the entire series is Shinji Hirako. There's no question about it. I'm completely bonkers over the guy, and who knows why. It might be that perverted grin of his, or his goofy attitude, dunno, but I love him. :D I actually have no idea what fangirls see in Byakuya or Toushiro, the former is completely stoic and boring and the latter looks like a ten-year old. o.O I have a ten-year old brother, so...no go for me.

I think that's about it, I may be missing some. But yeah, I love 'em. x) See how Ichigo ain't up there? Well, I must be the weirdest person ever, but I don't really think Ichigo belongs with anyone. I mean, I don't hate him or anything, he's an okay character, I just think he's completely clueless about love so he should just remain single. I may possibly be leaning more toward Rukia and Renji, but I'm not sure.

Favorite Characters (in no particular order...except for the first one)

And I think that's it, it takes a lot in a character for me to be 'head-over-heels-crazy-in-love-with-them'. People may think it's soooo surprising how Ichigo, Rukia, and Orihime aren't on the list, zomg, especially Rukia! I like them, but I don't love them, and that's all there is to it. >.> Actually, I think people give Ichigo way too much credit. Oh, and Aizen too. I only liked him during his time as a Lieutenant/Captain (aka, when he was wearing glasses, he was much hotter back then, in my opinion), and when he went all insane when Ichigo became stronger than him. (Manga spoiler). Like I said, I love the crazy characters. ^.^

I'm not very good of keeping track of a lot of things, so I probably won't have too many characters. In fact, I went through about ten different ones before deciding on Marise, so yeah. o.O Let's see, I had a Hana Kamuri (way Mary Sue), Naomi Sakuya (looked too much like Orihime), Adele Yanase (getting there...but too baby-faced), Angelica Watanabe (too sweet...), Zen/Gwen/Yoko Watanabe (couldn't decide on a name, I liked this one the most out of all, but it still didn't work for me v.v). And now we have the end product:

I created her because I was thinking about Mary Sues, and how I've never, I mean NEVER, seen the story told from the mean girl's point of view. I mean, everyone just assumes the mean girl is a bitch, and just leave it at that. She's just naturally horrendous, there's no background story, no reason as to why she's like that, it's just so stereotypical and frustrating. So I decided to change that, being the non-conformist that I am. >:D And I chose Angelica as my inspiration because she was probably the closest I could find to the story almost revolving around her, she was a main character. And hell, I loved her so much! So I don't want Marise to be the girl who's totally hated, everyone has their reasons for how they act.

I'm actually really surprised that I have 14 characters! Well, it really shouldn't be I guess...because once you give your character a family you have to make pages for them and then even more for all the people they're connected with. Anyway, here they all are, and a little bit of info on each of 'em:

Souichirou Asahina - I spelled his name wrong. I love the name, I had first heard of it on one of the few anime I've watched, His and Her Circumstances', but I never knew how it was spelled. Apparently it's "Soichiro," so I guess I just added two unnecessary "u's". ...Oh well. I'm okay with that, I like how it looks.

Lucille Asahina - I really like Lucille, I think she's pretty bad-ass in her own right, you can't go wrong with a girl with a gun, right? I really love who I based her appearance on, I think Marielle Bouquet is beautiful.

Ryuunosuke Asahina First order of business - the dude is NOT emo. I had a hard time trying to not make him a monotonous character, because that's one of the things I hate about a character. It being unemotional, a whore, and having no flaws. As far as I'm concerned, the first and last are practically the same, just because your character is unfeeling does NOT make it a non-Sue, in fact, to me it sounds like a cheap way to avoid putting actual flaws in a character. (No, I didn't intend to offend).

Taro Asahina - Too many sweet and innocent girls, not enough guys! Well, instead of making the predictable mischevous miscreant for Taro, I decided to make him a pure kinda kid. He was actually inspired by a little boy named Collin from the anime Emma: A Victorian Romance, he was so adorable and cried so often when he was being ignored, I loved him!

Coco la Veau - She reminds me of Loreli's mother from Gilmore Girls, although I didn't intend for it to be that way, but I'm okay with it, because she's hilarious. Coco has no powers, not gonna give her any, she's possibly a foil character, someone who brings traits out of the other Asahina family members.

Honovi - At first she was meant to be Indian (from India), and her name was supposed to be Rema Kharjan. But when I was looking for pictures I stumbled on this one and couldn't ignore it! So she's a Hopi Indian from Arizona, I was surprised in finding so many names, I thought about naming her Aiyana, but it sounded too pretty.

Naoki Shiraishi - I thought about naming him Mamoru, I really like that name, but decided against it. Originally he was supposed to be the unrequited love interest of Marise, but then she has Lupin, so scratched that idea. He still is gay though, it's just really fun to have a gay friend because there's nothing awkward in the relationship and that's what I wanted for Mari.

Fifi Nozawa/Renata la Veau - Smooshed these two together because they're really underdeveloped characters, I probably won't do too much with them. Former owns a bakery, latter owns a men's retail store, they're kinda opposites. Um...I kind of forgot why I wanted Luce to have sisters, but...*shrugs* I guess they can stay.

And now it's time for....King Arthur's Court! The band name was a total spur-of-the-moment, I just kind of thought it would be easy to make stage names, and so it all kind of fell together nicely!

Akio Tsuchiya - I think Akio is the hottest of my characters. Seriously. I actually had to change his last name twice, because, somehow, both were the last names of actual Bleach canon characters! So I was kinda frustrated. He's a regular Cassanova, but that's what makes him so wuvable. :D

Kirara Okamura - Kirara is probably my first tom-boyish characters, I really like her, she's cute. I love her name too, came across it while looking through animecharactersdatabase.com, and it just really stuck. I was trying to find another female involved with King Arthur, but none of them were well-known so her stage name became Merlin, and no, she's not insulted, in fact, she thinks it's pretty bad-ass to be a wizard.

Rina Komatsu - Now this one I was almost putting off, I knew she was going to be Guinevere, but I had to take my time because she was going to be my first "sweet" character. Now, no offense to anyone here on BFF, but I have seen a lot of female characters whose personalities are "warm, gentle, kind, sweet, loving, caring, etc." And...no actual flaws to them. So, I had to really think with this one. And so she's a nervous, clumsy, clingy, timid girl, along with being sweet! The clinginess is my favorite part, lol.

Danjuro Yamaguchi - Danjuro's a real bad-ass, I love him! Here is Sir Lancelot, before the guy you currently see I had actually another choice before him. I spent a lot of time looking through names before deciding on Danjuro, and I really like it, I think it suits him well. He kinda looks like Renji, eh?

Okay, well that's it so far! Feel free to send me any message, I especially welcome constructive criticism, so if you think any of my characters are Mary Sues, let me know! I try to prevent that!!!

Retrieved from "https://bleachfanfiction.fandom.com/wiki/User:Appleblossom?oldid=134853"
Community content is available under CC-BY-SA unless otherwise noted.