"When I go down,
I will go down fighting...
I'll go down like lightning."
—Character tagline

Tetsuo Momohara (桃原 鉄生, Momohara Tetsuo) is a Fullbringer and the current leader of Xstence. During high school he was a leading member of the Karate club at Karakura High School and a classmate of Ichigo Kurosaki. He was unofficially involved with Xcution for some time before the death of his father, after which point he moved with his sister, Hikari, to Ikeda, Osaka, where he currently resides. Tetsuo is close friends with Kōhaku Morimoto, as they have known each other since early adolescence and co-founded Xstence together. He was also close with Amaya Isaka until recently, their relationship becoming strained after the latter broke off their engagement.

Tetsuo is a tall, narrowly built man with slender, albeit masculine features. Standing at just above average height, he appears to be more lithe than he actually is, especially when wearing his suit for work. In reality, he has a powerful, lean build with wide shoulders, long limbs and a tapered torso: a classic swimmers build. This allows him more distance and power to his kicks in karate, and in the dojo he strikes an intimidating figure, his speed evident from the way he carries himself—like a coiled wire ready to spring.

Tetsuo has short, black hair, light skin with darker tan undertones, and gray-blue eyes. While a man in his early thirties, he appears to be a few years younger due to both his physical fitness and his scruffy, unkempt hair: an attempt at casualness. He has an angular jaw, a sharp nose with a high bridge, and square-shaped eyes that taper softly up at the corners. While considered to be somewhat attractive, his features are fairly average and his most notable aspect is a small scar on the corner of his left eyebrow from an injury he received in high school.

Tetsuo is typically seen in the suit and tie he wears to work, and he prefers blues, grays, and blacks to other colors. While his suits are well-tailored (courtesy of Kouhaku’s fashion advice), Tetsuo is not particularly attuned to style and as such there is little variation among his outfits. Nonetheless, he considers uniforms to be non-negotiable, whether that be his suit for work or his gi for karate, and he keeps them well-maintained. Since his motorcycle is his main form of transportation, he also frequently sports a form-fitting riding outfit, which is black with gray accents. Otherwise, he wears comfortable, looser clothing, such as a sports jacket, T-shirt and sweat pants when lounging around the house.

Tetsuo is a responsible man who is determined, focused and observant. He has a serious, no-nonsense demeanor and is generally too uptight for his own good, which his friends tease him for endlessly. While he might become annoyed with them and refuse to participate in their light-hearted banter, he is nevertheless extremely loyal, and will never back down on the commitments he has made to others. This ties into his inherent stubbornness, which can be both a positive and a negative trait. For example, while strong-willed and dutiful, capable of seeing out a challenge until the end, he also has an inflexible mindset and can be insensitive towards others. In short, once he’s made up his mind, there’s no convincing him otherwise.

Over years of practice in karate, Tetsuo has become extremely disciplined. He can use this self-control to his advantage as both a karate-ka and Fullbringer, as he refuses to react to the taunts of an opponent during a fight. His steely resolve allows him to analyze an opponent’s abilities as he deliberates a plan of attack. If an enemy threatens one of the people he’s sworn to protect he can become particularly ruthless, carrying out his self-assigned duty with bloodless efficiency. Nevertheless, his trained self-restraint isn’t perfect, and Tetsuo will occasionally crack, reacting with a spontaneous burst of emotion that leads him to take impulsive, dangerous risks—a reflection of his younger, much more aggressive self. This, coupled with his stubbornness, can lead him to develop unhealthy, obsessive tendencies, his greatest flaw. 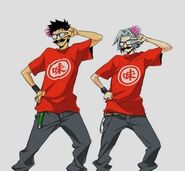 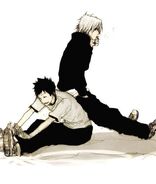 Tonfa: versatile, mid-range weapons that have become representative of the ancient Ryukyu martial art style developed in Okinawa. Although tonfa have a short reach, they are extremely fast and can be wielded in a number of ways to exploit their strengths in both offense and defense. Tetsuo’s particular tonfa are made of a high carbide tungsten-steel alloy, which is remarkable for its robust physical properties: tungsten has a higher melting point than any other non-alloy in existence, and the pure form is used mainly in electrical applications. Its temperature can be raised to the point where it glows with a brilliant white light without compromising its structure. Carbide is an extremely hard material that is used for making industrial cutting tools, and the steel alloy is used for its toughness and stability at high temperatures. This makes them heavier than normal tonfa, thus demanding a greater level of skill to utilize effectively. The tonfa are bladed on the outer side, but the blades are retractable so he can use them for either cutting or blunt impact. Mostly, however, he uses them to conduct the electricity released by his Fullbring.

High Spiritual Pressure: Tetsuo possesses a high amount of Reiatsu. It has been described as “heavy and chilling, [being close to that of a] Hollow.” His spirit energy is unique in fact that it has been altered by his Fullbring, even when he has not released his powers. Thus it closely resembles an “electrical charge,” and possesses several properties unique to that channel of Reiatsu. Such as an electromagnetic “pulse” that effects a being’s nervous or organ system, causing them difficulty in moving; or hallucinations from contact with his charged attacks. This can send false signals in the synapses of the brain, and would result in them seeing double images of Tetsuo, “mirroring,” or other unconscious effects. However, these are by-products of the Reiatsu and not proper techniques, as they only affect certain individuals and he has no conscious control over them. His Reiatsu is blue in color.

High Stamina and Strength: Because of his rigorous martial training, his body is in top physical condition. Tetsuo is an extremely resilient combatant, able to withstand most high-powered attacks from Hollows and other Fullbringers. He often continues to fight until the point of exhaustion, refusing to surrender while he still has energy left.

Enhanced Speed: When he was part of Karakura High School’s Karate Club, Tetsuo was known for his incredible reflexes. He is light on his feet and can easily dodge most physical attacks without aid from his Fullbringer abilities. His speed is his greatest asset.

Expert Hand-to-Hand Combatant: Tetsuo is extremely skilled in martial arts and is an agile fighter, easily able to perform mid-air maneuvers with little physical strain. His natural abilities are so impressive that even without his Fullbring he is a competent match for an opponent. He is ranked as 5th dan in Karate.

High Intellect: Tetsuo is insightful of other people, which allows him to predict their movements in a fight. He possesses a very pragmatic and resourceful intellect; demonstrating a knack for improvisation during the heat of combat. Since his ability relies on direct contact with the intended target, he utilizes stealth and unpredictability to take his opponents by surprise in order to gain the advantage in a fight. This tactical irregularity and resourcefulness coupled with his enhanced speed makes him a formidable foe.

Bringer Light: (完現光 (ブリンガーライト), Kangen Hikari (Buringā Raito); lit. "Full Manifestation Light") Due to his mastery of Fullbring, Tetsuo is able to use Bringer Light, which allows him to increase his speed and the height of his jumps by pulling on the “soul” of the ground surface or air. He has shown to be quite fast and skilled at the technique, able to dodge successive attacks with ease.

Flash Point (引火点 (フラッシュポイント, Furasshu Pointo); Jpn. Inkaten): When activated Tetsuo’s tonfa begin to spark with electricity that is generated by his spirit energy. (Technically speaking, the ionic imbalance created when Tetsuo subconsciously splits the influent/effluent currents or charged “protons” of his released Reiatsu.) He must make physical contact with his foe in order to electrocute them, with the exception of his synthesized lightning technique. His Fullbring consists of four main aspects:

"Rain is good for me. When it rains I can achieve actual clarity of mind. The longer I have to stand under it and endure it, the clearer my thoughts become."

Life is about choices. Some we will regret, some we are proud of. And some will haunt us forever. For this reason choices must be calculated, and made carefully.

Note: This character has been adapted from canon. The original article can be found here.

Retrieved from "https://bleachfanfiction.fandom.com/wiki/Tetsuo_Momohara_(SCB)?oldid=438711"
Community content is available under CC-BY-SA unless otherwise noted.