"Darkness thrives in his heart, the fallen angel that is beyond beginning and end." - Seireitou-shishō

Senzui Kururugi (枢木 泉水, Kururugi Senzui) is an ancient Soul from the days long since the beginning of the Soul Society. It is unknown if he perhaps went by another name but he urges those around him to address him as simply Senzui. Among those who were tasked to stand beside the King of Souls in his descent to the chaos-ridden mortal plain, who looked upon the world in despair at the boundless darkness and knew naught how to bring salvation, Senzui was often relied upon by the fledgling King for guidance in these troubled times. His strength and abilities were of such vast quality that he was deemed to be a warrior with no equal, feared by even the Hollows that were said to be the very manifestation of nightmares themselves. Unbridled respect for this man resounded in the hearts of every soul that swore loyalty to him and the King of Souls. However, there lay a darker story to Senzui that very few ever came to understand about the man; even in the modern age where his existence is the topic of history books. Ironically so, it is a story of darkness that begins with the most well-mannered of intentions, as these tales often do. Perhaps driven by a desire to cure the realm of its infliction, Senzui took it upon himself to find a solution; binding the darkness plaguing the world before him, restoring lands one at a time, he willingly accepted the chaos into his soul in order to bring about deliverance to the mortals. However, it had begun to warp his existence, shattering his very being until he was no longer an entity, divine or otherwise, but an avatar of the primordial darkness. He ascended beyond the notion of an existence, resulting in a detachment from the world flow, and even from life and death. Still, he persevered, believing his work to be of the utmost nobility. However, he was looked upon in apprehension by others, ostracized and demonized for what he had become, until he was viewed as the most horrific monster of them all. When the King proceeded to separate the world into the many realms in order to truly pacify the darkness, Senzui was banished to the furthest depths of the dominion designated for the masked ones. There can be no means by which to express the entirety of the hatred that was felt by him as a result of this betrayal.

As a being outside of life and death, beyond the traffic of souls itself, he is an anomaly that has held many different identities and roles throughout his long depraved existence as a scourge of darkness. From what is known, he had briefly taken up the mantle of a Shinigami, hiding his true identity as he played advisor to the young Shigekuni Yamamoto long before he led his campaign of conquest. Based upon the surname he took up, he had once served as the head of the Kururugi Clan, becoming the grandfather of Senka Kururugi and great-grandfather of Utsugi Kururugi. In truth, the motives for Senzui's actions at this time were constructed from many different whims and desires, but the most prominent of them which drove him inexorably was his deep-seated hatred for how the world had come to be via the Soul King's efforts. With a life such as his which knew no beginning and no end, the only thing that he had was nothingness, and perhaps in some desire to put an end to such a stagnant life along with the realms created by his most hatred nemesis, Senzui wished to inflict true chaos onto the world. Among the myriad of schemes he went about, it was his involvement that led to the rebirth of the Quincy King, formerly Seraph, Yhwach. Similarly, the birth of Seireitou Kawahiru, a being never intended to be born at all, had come to be as a result of Senzui's actions; whether by intention or otherwise. However, his ambitions were soon brought to a halt, upon being confronted by Shōyō Kawahiru and Hanzei Kurokami; two men whom, at that time, stood as honored members of the Royal Guard. Try as they might have, they found their attempts at slaying the abominable entity nigh impossible, and so, in a desperate ploy to close the curtains on Senzui's intentions, the two acted in unison and sealed away the latter with a powerful spell. Shōyō and Hanzei had succeeded, but it had not concluded favorably for them, for they had now been rendered nigh powerless due to the nature of the seal they had enacted upon Senzui. Deigned to becoming outcasts, having been banished by the Royal Guard for their inability to serve as proper guardsmen, the two split off and settled in different areas of Rukongai. Though there would be no honor nor praise found in their actions, they respectively found solace in the fact that they had stopped the madness of this entity of hatred. But this would not be Senzui's end.

After the death of Shōyō by the hand of Genryūsai Shigekuni Yamamoto, along with the subsequent destruction of the former's school, the seal had weakened sufficiently enough to allow Senzui to escape. With his body long since destroyed, there was no place for his immortal soul to attach, save for the body which was linked to him via the spell used to seal his soul. When Shōyō's decapitated head and body were burned at the stake, something both terrifying and miraculous came to pass, as the body of Shōyō was once more a complete entity, but now played host to the soul of Senzui himself. Shōyō was no more. However, despite his successful resurrection, Senzui's power was still drastically lower than at his prime and so he would have to bide his time until he would be able to execute Hanzei; the sole link maintaining the effects of the spell restraining his strength. Over the course of a thousand years, Senzui played a hand in many events and situations throughout the ending stages of the Warring Souls Period and the entirety of the Heiwa Period; pulling on the strings and influencing the circumstances. His influence extends to even the Central 46, hiding in the shadows and ultimately controlling their decisions for the last couple centuries. He served as the personal mentor at one time to Sōsuke Aizen; slowly instilling in him skills that would harness the unusually high power the latter was born with, while subtlety driving Aizen to darkness and corrupting his heart, eventually pushing him to seek out what Senzui also sought and seize the throne of the Soul King. He was responsible for inciting and spurning on an abhorrence within Yhwach's heart for the King of Souls, which would lead to future conflicts of grand consequence. In the wake of the Wandenreich invasion, Senzui regained enough strength to confront Hanzei, who was weakened by age and inactivity, and managed to murder the swordsman with ease. Finally, after centuries of awaiting this very moment, he had returned to his prime condition.

"The last sight that an insolent student like you deserves to see... is the face of your teacher as your murderer."
—Senzui confronting Seireitou, referencing his residency within the body of Shōyō. 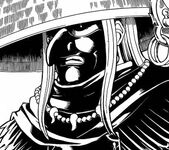 Senzui unmasked.
Add a photo to this gallery

"Within all beings, from their foremost personae to the deepest plateaus of the unconscious, lies the insatiable desire for conflict. The ideal you speak of — a world of peace where all people are connected by understanding rather than warfare — is nothing but the cute words of a child. One can not ignore their base instincts. Humans will always be drawn to conflict. Understand that you are not fighting me... so much as you are the human condition."
—Senzui speaking to Minato Kuramoto.

Mei no Tachi (冥の太刀, "Longsword of the Underworld"): Taking the form of a standard katana, Senzui's Regalia takes on the form of a blade which is stained jet black along with a matching hilt consisting of a very simplistic swirl-like design running up and down the handle; iconic in the fact that it is a Regalia which had been imprinted with the power of the goddess, Izanami. The crossguard has four prongs bent out to form the shape of the manji, which is also black in color.

Originally constructed as a homage to Utsuro from the anime and manga series, Gintama, from whom the likeness of this character was also contrived, Senzui was later further developed via inspiration drawn from Ardyn Izunia, the lead antagonist of the video game, Final Fantasy XV.

Retrieved from "https://bleachfanfiction.fandom.com/wiki/Senzui_Kururugi?oldid=403034"
Community content is available under CC-BY-SA unless otherwise noted.