"Would I be able, by tying heaven and earth, to join them as one?" - Seireitou-shishō

Orihime Inoue (井上 織姫, Inoue Orihime) is a female Psysis that had once lived in Karakura Town. At one time, she was regarded as a Ryoka by the Soul Society, but after the end of the Winter War, she became one of their unofficial allies. After her high school graduation and the subsequent departure of her friends, with Yasutora Sado becoming a professional mixed martial arts fighter and Uryū Ishida becoming the head of his father's hospital, Orihime would have a brief venture as a gravure idol and later got involved in a singing career for a few years. She became famous throughout the world as the Japanese pop music star, "Princess Oribana" (織花姫, Oribana-hime; literally "Woven Flowers Princess"). Orihime went on to marry Ichigo Kurosaki and conceived a son named Kazui Kurosaki, residing with her family in her hometown.

Being about average in height for a girl of her age, Orihime far outshines most women younger, older, and even roughly the same age as her with a slender yet curvaceous figure that is only accented by her very large breasts; something that is often considered one of her most noticeable physical traits. She has deep brown eyes and long, waist-length, burnt orange hair. Orihime is known to wear her hair in a variety of styles, mostly at the beckon of her make-up team as a pop star, but she normally would wear her hair in bangs tucked behind her ears with hairpins, which she only removes to sleep, as they are worn in the memory of her brother. Orihime initially wore her hair with a full but parted fringe before pulling most of her bangs behind her ears as she was ready to leave for Soul Society. Seventeen months after Sōsuke Aizen's defeat, Orihime's hair becomes fuller and wavier. Her bangs naturally frame her face without her hair clips and also hang over her ears. She stops wearing her hair clips and instead keeps them clipped onto the left collar of her school uniform. It should also be noted that as a performer, she is often seen in a variety of extravagant ensembles, but generally seems to prefer an outfit similar to Arrancar attire whenever she is engaged in battle. According to Kisuke Urahara, the outfit was designed so that if she ever covers the middle, her breasts will overflow from the sides.

Orihime in a towel. 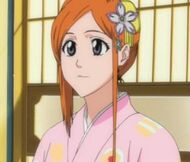 Orihime during the New Years celebration.
Add a photo to this gallery 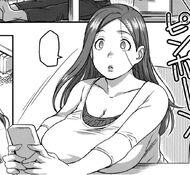 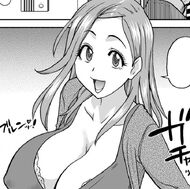 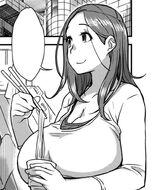 Orihime enjoying her favorite meal.
Add a photo to this gallery

High Spiritual Power: Orihime is able to get close to several battles between powerful opponents without being overwhelmed, such as the battles between Ulquiorra Cifer and Grimmjow Jaegerjaquez, as well as Ichigo Kurosaki and Ulquiorra. During her basic training in Kidō with Kūkaku Shiba, Orihime demonstrated a natural talent for precise spiritual energy control, as she quickly mastered the technique. Her spiritual energy is golden-yellow in coloration and despite having moments where it can intensify and influence the area around her, it is naturally docile and calm in its behavior; a parallel drawn to her pacifistic personality. It appears that she has a considerable degree of control over her power given that Orihime has a good amount of skill in detecting spiritual energy. She can sense Hollows and ongoing battles at a significant distance. If she concentrates, she can even sense the spiritual pressures of people within protective barriers. She could even unconsciously resist the effects of Rukia Kuchiki's Memory Chikan device, prior to understanding her spiritual abilities, given that she was able to recall the event of her brother fighting Ichigo.

Expert Hand-to-Hand Combatant: While a pacifist by nature, Orihime has a natural talent for martial arts. She reveals that Tatsuki has trained her somewhat in karate. According to Tatsuki Arisawa, Orihime has the fighting skill of a black belt. Orihime is skillful enough to incapacitate two unseated Shinigami soldiers when she surprise attacks them.

Enhanced Durability: Orihime is strong enough to survive separate assaults by Loly Aivirrne and Menoly Mallia, which involved physical attacks and the use of Bala, and minor assaults by Nnoitra Gilga and Tesra Lindocruz. It is also stated by a few people that she has a strong head.

Awakened by the Hōkyoku, the core of Orihime's spiritual powers lies in the ability to influence space and time in order to reject and deny certain events from occurring. When she cursed her powerlessness with all her heart, the Hōkyoku responded to this desire by materializing her heart into a physical form which granted her this power. Sōsuke Aizen describes this as "the rejection of events". Her ability is to limit, reject, and negate any kind of event that has happened to her target. It is an ability that returns her target to its former state, no matter what has happened to them; it is a power that trespasses into God's territory. With the help of Saori Sumeragi, Orihime has managed to further strengthen and refine her power as well as her control over its capabilities.

Shun Shun Rikka (盾舜六花, literally "Six Flowers of the Hibiscus Shield"): The materialized form of this power, Orihime's spirit energy is harbored in the pair of hairpins that her brother gave her. Shun Shun Rikka is composed of six spirits, which work together in various combinations with a spirit chant and the technique name spoken by Orihime in order to perform a specific task. Only spiritually aware beings can see them. They reside in her hair-clips, which are shaped like six-petaled flowers. Each fairy is two points on a given clip when inactive. Hachigen Ushōda comments that her hair pins, being the physical manifestation of her powers, is very much like the Zanpakutō of a Shinigami, and that her powers resemble his own powers. Tesra Lindocruz, when holding Orihime captive, warns her not to try to attack him, as he can easily break the physical container of her Shun Shun Rikka, the hair pins themselves, stating that they are ridiculously weak. The spirits are separate manifestations of Orihime's spirit, each with its own unique appearance and personality. Each are named after a flower; respectively, they are Ayame, Baigon, Ayame, Hinagiku, Lily, Shun'ō, and Tsubaki. They all have their own individual personalities which reflect certain key aspects of Orihime's own persona.

Through various combinations of the six fairies, Orihime has the power to reject phenomena by denying or undoing events in various forms. This power can be used for attack, defense, or healing (depending on the combination). Orihime's determination directly influences the effectiveness of her powers. Feelings like doubt or worry make them weaker, while conviction makes them stronger. Orihime's techniques involve incantations and manipulating the Shun Shun Rikka into different groups. Though Orihime initially needed to recite their kotodama to use her techniques, further training has rendered this unnecessary. Her kotodama consists of voicing the names of the members involved, followed by the technique name and the phrase "I reject" (私は拒絶する, watashi wa kyozetsu suru), a reference to the nature of her powers.

The information listed on this page is a fanwork based on Orihime Inoue and will depict non-canon elements. Thus, this article will only be used in works of the author unless permission is given by another user. In addition, some parts of this page's content is derived from Bleach Wikia. This text is available for use under the GNU Free Documentation License.

Retrieved from "https://bleachfanfiction.fandom.com/wiki/Orihime_Inoue_(Seireitou)?oldid=400267"
Community content is available under CC-BY-SA unless otherwise noted.