"In the darkness, arise one's desires... and both their dreams and nightmares take shape." - Seireitou-shishō

Kuniharu Inuzuri (戌吊 邦治, Inuzuri Kuniharu) is a male Soul born of a distinct Inugami lineage. Hailing from the Inuzuri District, from which he derived his surname from, Kuniharu was an orphan that was given his name by a kind family that had taken him in and raised him as their own son. However, a disastrous event led to the entire destruction of his home and the death of his foster parents, which prompted him to carry the name of his district as a homage to their lives. He lived on his own as a wanderer for several hundred years, training and honing his skills in order to ensure his own survival, before he was eventually confronted on the Rukongai outskirts by Seireitou Kawahiru, and after a drawn-out battle between the two of them, Kuniharu later accepted an offer to become a residential instructor of the Senjukuha.

"Now see here, boy. Inugami only retain child-like forms to conserve our strength. We don't age from our youthful days, no matter how old we get, so stop treating me like a child. I've lived for over ten or so times that of a human's full lifespan."
—Kuniharu reprimanding Minato Kuramoto for calling him a child.

According to Kuniharu, Inugami typically exist naturally in child-like forms, retaining youthful appearances so as to conserve power but also to throw off their predators; despite being able to reach advanced ages similar to Shinigami. Kuniharu himself is just under a thousand years old. In his normal state, he appears as a short boy with dirty orange hair that is unkempt. He wears orange martial arts pants along with a decorated beige martial arts jacket along with a fitting obi belt. Whenever moving for a designated task, he typically adorns his large Zanpakutō onto his back.

When he enters his true form as a dog spirit, he quickly grows to an adult height and his hair lengthens tremendously. The transformation into this form, with is accompanied by a change of clothes that reflect the change in spirit, has often been compared to that of a Bankai; often preceded by a flash of spiritual power that envelopes his being. In this state, Kuniharu has a rather distinguished and arguably handsome appearance, being fairly tall and lean in his build. He has light skin with pointy ears, golden amber eyes and knee-length silver hair with short bangs. He has a blue crescent moon on his forehead that can be seen beneath his bangs along with two magenta stripes on each cheek and on the sides of his wrists, as well as one magenta stripe on each of his eye lids. Kuniharu adorns armor that presumably belongs to his clan and is normally worn only by the one in possession of the family's combat secrets. It is truly a unique set-up which includes a spiked pauldron that covers his left shoulder attached to the upper section of his cuirass. Both his armor and his long flowing sash have a decided chinese influence, as opposed to the customary japanese armor and sash. His kimono is mostly white with a red and white cherry blossom flower crest at the collar and sleeves. He wears special flowing hakama, which are gathered at the ankles producing a "ballooning" effect. His footwear consists of flat pointed ankle-high boots (instead of sandals). The left side of his collar features the crest of the Azai Clan, suggesting that he may have some relation to them. On his right shoulder is a white object that appears to have a fluffy appearance. It appears to actually be something that exists as a part of him, shown from the fact that it bled when struck by a weapon, and can be used for defense and to constrict targets.

Kuniharu's full dog form.
Add a photo to this gallery 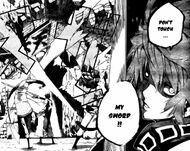 Kuniharu excited for battle.
Add a photo to this gallery

Tsuchikan (土勘, "Earth Instinct"): According to Kuniharu, Inugami and other associated canine entities are far more in tune with the earth and worldly foundation around them than most spiritual beings. As though it were an extension of themselves, they are able to use a skill aptly known as seismic sense which allows them to sense and perceive things through the earth below them; the act of which makes it possible for them to channel their six senses, including that of spiritual power gauging, through the earth itself as a medium and therefore perceiving everything touching or connected with it. Kuniharu is so skilled with this ability that he could keep track of every movement made by Kyōkai Namikaze during his five-day survival training on the mountain of Shizaru.[1] Through this power, Kuniharu has demonstrated the ability to literally manipulate earth itself, creating something as precise and accurate as three stone pillars with a mere step.[1]

Retrieved from "https://bleachfanfiction.fandom.com/wiki/Kuniharu_Inuzuri?oldid=385580"
Community content is available under CC-BY-SA unless otherwise noted.