Kazui Kurosaki (黒崎 一意, Kurosaki Kazui) is a male Human born of Shinigami blood as well as a distinct Quincy lineage. He is the son of Ichigo Kurosaki and Orihime Inoue. As a result of his birth, he demonstrated incredible potential at a young age, already being capable of manifesting a Zanpakutō prior to adolescence. Kazui would later be appointed as the official Substitute Shinigami of Karakura Town, in service to Soul Society, succeeding his father who held the position before him. He dreams of becoming a hero that will bring peace to the world, feverishly working to become the strongest Shinigami he can be, which contrasts with his father's more modest intentions. In his pursuit to achieve greatness, Kazui would eventually cross paths with Seireitou Kawahiru, in order to unlock the potential hidden deep within him.

Born with his father's bright orange hair and his mother's dark orange eyes, Kazui is a moderate-height teenager who wears a black cloth headband which keeps his spiky hair a tad messy and styled upwards. He is noted as having inherited Orihime's facial curve and eye shape, with his face slowly developing to look more like that of Ichigo's own face as he matured. As a child, he commonly wore various casual items of clothing, such as his favorite green hoodie. When transforming into his Shinigami form, he was adorned in the standard robe, complete with the black kosode and black hakama. At some point, he came to learn more about his Quincy lineage, and after becoming a Substitute Shinigami, he requested his mother to remodel his Shinigami robes to resemble the mantle worn by Quincy. He wanted to honor both of his birthrights. The result was a black mantle worn over his shoulders, while retaining his black hakama, and a standard white shirt underneath with a western belt around his hips. 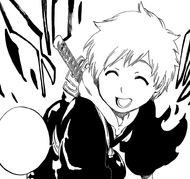 Kazui's Shinigami form as a child.
Add a photo to this gallery

Ryōgetsu (凌月, "Eclipsing Moon") is the name of Kazui's Zanpakutō, following the same naming scheme as his father's sword and his grandfather's sword. It does not appear to have a sealed form, instead being constantly released in Shikai. Depending on which form he decides to keep the Zanpakutō as, Kazui either wears the blade on his back via a strap or at his hip with his belt.

Kazui's Zanpakutō is unique in the sense that it is both a constant-release type while also possessing two distinct forms in Shikai. It is able to shift between the two different variations on a whim, completely altering both its coloration and shape, as well as its abilities. Because it is always in its released state, it is presumed that Ryōgetsu does not have a release command. Due to the fact that the Zanpakutō frequently changes its form, the color scheme seems to fade in and out to the point that the blade sometimes resembles a mix of both white and black.

The "White Blade" (白刀, Hakutō) is the manifestation of Kazui's Human and Quincy powers. Taking the form of a large white broadsword with a black cross-shaped hilt and guard, it is a sword that "undoes" anything slain by it, a power inherited from his mother, Orihime Inoue. Ryōgetsu does this by splitting apart whatever comes in contact with the sword and rejects the phenomena on both sides of the blade. However, because the act demands that Kazui actually cut through the target to reject it, the blade is incapable of being used for healing purposes.

The "Black Blade" (黒刀, Kokutō) is the manifestation of Kazui's Shinigami and Hollow powers that he inherited from his father, Ichigo Kurosaki. It seems to resemble the blade that was originally Tensa Zangetsu albeit with a white handle and guard. In contrast to the white sword, the black blade of Ryōgetsu does not "split apart" but "gathers together". Initially, this ability only allowed Kazui to gather together his own reiatsu around the blade so as to fire off attacks similar to that of his father's Zanpakutō, but through training, he came to eventually realize the black blade's true capabilities. Reminiscent of a Hollow, Ryōgetsu's black sword is able to absorb the spiritual power of anything on either side of the blade when it comes into contact with its target. Just as the white blade rejects anything cut by the Zanpakutō on both sides of the sword, the black blade absorbs everything on either side of the sword. As it turns out, when Kazui was a child, he had unintentionally done this action with his bare hands to the remnants of Yhwach's reiatsu that attempted to materialize in the Human World. He was later able to draw upon this power, causing a black energy to flow from the blade into and around his body, manifesting as a layer of darkness that surrounds his sword-wielding arm and half of his body.

Retrieved from "https://bleachfanfiction.fandom.com/wiki/Kazui_Kurosaki_(Seireitou)?oldid=440513"
Community content is available under CC-BY-SA unless otherwise noted.