Kairō (狩威狼, Hunt, Majestic, Wolf), born Kyros Tavoularis (Κύρος Ταβουλάρης, キロス・タブラーリス, Kirosu Taburārisu) is a former 3rd Order Wizard of the Lancers Squad of Wing Bind . He is later imprisoned for his perceived treasonous acts, and after his conspiratorial release, starts the Pstryke War with his followers, the Aurans.

Kairo has always been noticeable by his blue hair, which has only gotten darker since his release. While as a child and during his years as a Lancer he kept it short, allowing it to spike, his hair grew during his imprisonment, and he kept it that way after his release. During his time in Wing Bind, Kairo always kept clean shaven. However, after his release, he decides to grow a sharp goatee. Kario’s facial hair also grows blue.

Kairo has always been extremely muscular, and his immense pride saw him flaunting his muscles at every stage in his life. Most of his outfits were centered around his monstrously muscular body. As a Lancer, most of his coats and shirts exposed his abdominals, and as leader of the Aurans, Kairo’s only upper-body clothing was a jacket hung from his shoulders. While as a teenager and during his time in Wing Bind he was much more lean, his body seems to have grown during his imprisonment. Where his focus used to be his abdominals, now it seems to be his entire upper body.

As a teenager, Kairo preferred yellow and oranges. His main pair of pairs has leather padding sewn onto the thighs and shins, as did his jacket on its forearms. During his years as a Lancer, Kairo preferred deep reads, supposedly to offset the color of his hair. He wore tight pants and a tight buttoned down shirt in the years before his final deployment. During his final deployment, Kairo wore a dark red long coat with a wide, open collar. The bottom half of the long coat flared, and there were metal studs sewn into the forearms. After his release, he sports a look consisting gold shoes, white trousers, His white trench coat, stolen from his previous warden, hangs just on his shoulders, revealing its violet interior.

After his release, Kairo sports large tattoos across his chest, back, and forearms. While they are first assumed to be Magical or in some way related to his Pstryking, it is eventually revealed they are remnants of the Dragon Egg he was imprisoned in.

A younger Kairo, as a member of the Lancers Squad 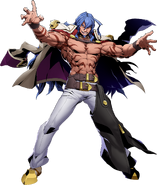 Kairo is a man who loves play, and loves battle, and often confuses the two. He is immensely sensitive, and can snap from playful to blood lusted like that. In his youth, Kairo’s sensitivity could lead him to enter periods of depression, where he would rather just settling arguments with simple arm wrestles than all-out bouts. He would often wander and train during these periods.

After his release, Kairo’s primary trait seems to be his blood lust. His playfulness has translated into an intense desire to seek revenge on his imprisoners and seek out strong opponents. The playful confidence of his youth has become arrogance, though not unfounded, and he often mocks or trash talks his opponents.

That being said, this behavior only emerges in opponents he deems worthy of his strength. He has spats of nobility, where he won’t demolish opponents too far beneath him (how he determines this is unkown) and has said he is against the strong bullying the weak.

His periods of depression have grown into rage when he feels things aren’t going his way. While he sees this as a refusal to lose, other’s mark it as a temper tantrum, harkening back to Kairo’s childlike nature.

Kairo was born Kyros Tavoularis in Greece. He was born into poverty, and by the time he could walk and talk, he had become a courier and information dealer in the Nychthirio (夜の野獣 (ニックティリオ), Nikkutirio, νυχθηριο; Greek portmanteau of “night” and “beast”, Japanese for “wild beasts of night”) criminal ring. He grew into a thief for the ring, a position he would hold until he was a teenager.

During his time as part of Nychthirio, Kairo becomes aware of his Pstryke powers, though he is initially unsure of what exactly they are. All that he knows is the when it comes to any kind of fist fight against another enforcer, or a skirmish with a rival gang, Kairo is always much, much, stronger. If, somehow Kairo is injured, he can call “the heat within” to heal himself at super-speeds. It is this same heat, Kairo says, that fills each of his attacks with the force they contain. The only one who doesn’t treat Kairo like a monster is the man who recruited him from a young age, his thieving mentor Sivana (シバナ)。

Eventually, conflicts with a rival gang, called Redveil (レッドベイル, Reddobeiru) come to a front, and Sivana is forced to send Kairo on a direct attack mission, rather than simply steal or smash and grab. During Kairo’s infiltration of the Redveil HQ, he comes face to face with the gang’s leader, Kieresolle (キーレソール, Kīresōru). Kieresolle is the first opponent Kairo doesn’t immediately destroy, and for the first time, he sees battle as playing, now that he can land multiple hits without it being over. Kieresolle can keep up Kairo, and her attacks are actually felt by Kairo. It is in this battle that Kairo manages to use Shine for the first time, and rips a hole through Kieresolle. While initially saddened at the end of the battle, Kieresolle unravels and reveals herself as a Disguiser Dragon. Kairo is nothing but excited, and does battle against his new, stronger foe.

Sivana is forced to retreat with his forces, and all of Kieresolle’s followers flee as well after seeing their leader was a Dragon. Sivana worries for Kairo, but upon seeing the building-dropping scale that the battle had escalated to, he has no choice but to leave Kairo.

Kairo is thrilled. He and the Dragon seem evenly matched in physical combat. While Kairo can perceive the Dragon with his first five senses, he comes to able to sense it with a sixth, feeling the Dragon’s presence as a weight or pressure against his own as he learns to sense Reiatsu mid-battle, Pstryking to grow his Reiryoku. As soon as he discerns the Dragon he discerns another, and in an instant, a young boy emerges on the scene and destroys the Dragon with an odd bladeless hilt. The boy then turns around and waves a hand at Kairo, and his world goes dark.

Dragon Vein Restriction: After Kairo’s release from the Dragon’s Egg, he still retains remnants of its imprisoning power in the form of intricate tattoos across his chest, back, and arms. These Magical tattoos are the Dragon Vein Restriction (竜血限界限定, Dragon Blood Limit Restriction) designed to keep in check the monstrous power he developed while in the Egg. It is unknown who controls the restrictions.

Rudimentary Martial Arts Knowledge: When it comes to official fighting styles, Kairo is unlearned. His fighting style comes from instinct, and is a rather direct, brutish approach to combat.

Kairo is a master Pstryker. He awakened his power instinctually, and uses it flawlessly to brew Reiryoku to improve his body, and emit Reiatsu to destroy the world around him.

Retrieved from "https://bleachfanfiction.fandom.com/wiki/Kair%C5%8D?oldid=438373"
Community content is available under CC-BY-SA unless otherwise noted.