Shijin (尋矢,"Fathom Arrow"), more commonly known as The Masked Man is the founder and current leader of the elusive Coven. His story began when the Rain Dragon Kouzenkojun was cast down to Soul Society by his own kind, following an act of hubris which they deemed to be far too vulgar and human-like to warrant his continued place amongst them.

Devastated by the loss of his home, and humiliated at being forced to spend the rest of his life as one of those mortals he considered to be lesser creatures, the scorned dragon used the last vestiges of his great power to create a scapegoat for his wrongdoings. It was an ancient spell of a nature which even Kouzenkojun could scarcely fathom, and the result was that he created a near-identical replica of himself, who possessed all the traits that the other dragons had so despised. And in this vessel he poured his most negative emotions, his anger, his grief, spite and ambition.

He would remain unsullied, and the Simulacrum would bear responsibility in his stead. But something else occured, the vessel grew concious and individualistic.. moreover, it quickly grew very powerful. Because in his haste, the dragon had mistakenly imbued the simulacra with his own latent draconic powers, powers which waned within him. Soon, it grew more powerful than it's creator and overpowered him once Hiroya realized his folly.

Another, older and wiser dragon might've given pursuit, but despite how it had turned out -- the Simulacrum still remained the perfect scapegoat: and so it was allowed to do as it pleased until it finally assumed a persona of it's own, and gathered like-minded spellcasters to the cause of magical supremacy. 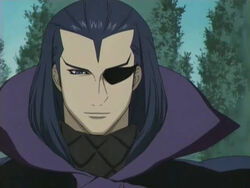 Although the Masked Man and Hiroya were created to be almost identical, Shijin used magic to change his appearance in order to adopt a persona which felt his own. In many ways, his appearance mirrors Hiroya's own, but in others it diverges drastically -- most notably in dress sense, for while the latter is deeply ashamed of his past hubris, the other cultivates it meticulously, wearing garments of great flair and volume. Indeed, many of them are outright garish and distasteful to the casual observer, but to Shijin they are part of the grander effect.

Shijin's hair is blue-grey and neatly slicked back to suit his vanity, there a slight greasy quality to it and it's noticeably longer than that of his counterpart. Whereas Hiroya strives to keep a fairly minimalistic appearance, The Masked Man does his best to exude a sense of superiority in everything he does, and carries himself like a king among his subjects. His gait is serene and composed, like that of a high ranking noble and his billowing purple robes extend out behind him as he walks.

If Kouzenkojun's preferred form is simply comely, then Shijin strives to maintain an appearance of dignified elegance. Modelling his face in the likeness of great men of yore. Although his face is seldom witnessed by members of The Coven, and it's believed that only the upper echelons have laid eyes on his features. But those who have are quick to note the eyepatch that always covers his left eye.

While dealing with members beyond the rank of Sorcerer, he wears a dramatic ensemble consisting of an immaculate purple robe, with a high collar and an eerily detailed mask beset with long feathers, and it is this persona which earned him the moniker by which he is most known.

The Masked Man was created from the worst traits of Kouzenkojun, and while this renders him deplorable, misanthropic and inconceivably arrogant -- he also retains some of the dragons better traits, most notably his drive, ambition and a sense of responsibility not seen in his maker. At a glance, he seems just and fair, a noble leader worth following. Continued dealings with him however gradually reveal a callous disregard for life, not one born of malice, but one born of a sense of warped sense of ownership. As if living beings are but toys for him to play with, while others might require motivations such as revenge, Shijin doesn't and sometimes plays especially brutal mind games with the slaves in The Coven's clutches.

Schemes like these range from petty or trivial to unspeakably cruel, such as requiring that a slave sacrifice his own child to appease him, as a test of faith. Yes, the mageless have learned that in the eyes of the Masked Man, they are all insects - pawns before the hand of a God. It is of no concern for one such as him whether humans live or die, it is all up to his whim and wants. Even the greatest beings in existence, such as the Soul King is far beneath his worth -- and only serve as means to an end, a way to achieve his goal of bringing about a true magocracy.

When he interacts with The Coven however, he shows himself to be surprisingly compassionate, being quick to forgive mistakes on background of their apparent simplicity in his eyes. It would never occur for Shijin to punish a spellcaster of any kind, as they are a superior lot set above common souls. In light of this, he does his best to ensure their continued loyalty to the cause of The Coven, and assumes his mantle of leadership with responsibility.

His at first amiable nature is otherwise expressed in full, as even while addressing sworn enemies he is not above engaging in polite conversation even as he unleashes untold horrors upon them, and reaps the lives of thousands of humans. His disposition never gives way to anger, even if he's somehow foiled.. he instead finds resistance to be endearing, even amusing and in combat he stands idly by and allows his challengers to make the first move, if only to prove to them that they never stood any chance. That all their preparations and earnest work amounts to nothing in the end.

The Seal of Aadolmida: Many have wondered what the purpose of Shijin's eyepatch truly is, for both of his eyes are indeed intact. Scholars would find the truth interesting indeed, for the eyepatch is nothing less than the Seal of Aadolmida, a powerful magical item which serves to keep The Masked Man's draconic powers subdued and out of easy reach. Should he ever remove the eyepatch, the eye of a dragon would stare back at his adversary and his power would rise exponentially at that moment as he channels the full power of his heritage. This isn't done out of some desire to draw out a fight, but to ensure that it's power is easily focused in those times where he might require the creation of such a miracle.

Most of the Masked Man's skills and abilities are detailed on the main page. This section largely details the abilities which Shijin possesses which Hiroya doesn't.

As a perfect Simulacrum of Hiroya Ginkarei, Shijin possesses all the magical powers at the formers disposal, and has access to all of his experience, knowledge and abilities. However, because The Masked Man possesses the part of Kouzenkojun which governed his draconic heritage, he is by all accounts superior to his counterpart in terms of magical ability.

However, the greater array of spells and wonders available to The Masked Man are only truly usable if he removes the Seal of Aadolmida which serves to regulate most of his divine powers. Otherwise, their capabilities are more or less identical to one another, with Shijin being but a shade more powerful than Hiroya.

Should the Masked Man ever remove the Seal fully, he'd be capable of utilizing his personal selection of spells, which go by the name "The Ways of Catastrophe", it is believed that each of these spells have the scope to affect an entire continent and each one of them would undoubtedly lead to the demise of millions of human lives. For many years, these spells have been wielded as a threat towards the Gotei 13 and the balance between the worlds, and this is how The Coven has survived for so long.

As the inheritor of Hiroya's draconic power, The Masked Man possesses untold powers which put him on par with a true deity when unleashed in full. But given the disgraced nature of Kōzenkōjun, and his incomplete existence, these powers aren't constantly available to him. Indeed, it is only when he reveals his left eye that he might wield the power of miracles in full. To Shijin, this is the Eye of Kōzenkōjun.

The power of a dragon is magnificent, as if belonging to an actual god, but when used by someone lacking in nobility, compassion and with an utter disregard for human life, it is terrifying beyond belief. With naught but the desire to do so, the Masked Man might summon forth a swarm of meteors to bring utter devastation to an entire country, cloak the earth in a never ending thunderstorm and raise islands from the seafloor. He could have nature reclaim its land and destroy civilization by having a forest spring to alive amidst a bustling city.

But such matters pale in comparison to the horrors that he might truly unleash should he desire it. One of the greatest threats that The Coven has made in order to secure its continued peace, is the threat of Shijin undoing the very bonds of death itself, before killing thousands of innocents in order to raise them anew as walking dead – for him to raise the population of a lesser country in this manner would result in a form of apocalypse, for each victim would rise anew as one in turn.

Beyond this, the Eye of Kōzenkōjun also permits the creation of whole new races and creatures, by ascertaining control over a concepts very state of existence. The leader of the Coven has employed this in order to create demure dwarf-sized creatures with blue skin called the Magelings, who tend to the basic chores of The Coven. Commonly serving the role of cooks, maids and other everyday activities, while its possible for him to create something more advanced, he fails to recognize the necessity of doing so.

Retrieved from "https://bleachfanfiction.fandom.com/wiki/Hiroya_Ginkarei/The_Masked_Man?oldid=400701"
Community content is available under CC-BY-SA unless otherwise noted.