Hibiki Asakura (朝倉 響, Asakura Hibiki), often referred to as Echo (エコー, Ekō), is a male Soul born to the fallen Asakura Clan. Over a thousand years ago, he played the role of an ally to the Gotei 13 as a member of the Yonkō, working alongside Seireitou Kawahiru, Raian Getsueikirite, and Hikaru Kurokami during the Quincy Blood War. He is a being that has formed a contract with Hell, becoming an embodiment of its will, only to eventually subjugate its powers and turn them into his own. Though his current intentions are shrouded in mystery, he is known to scour the Human World as well as other realms from time to time. It is known that he was approached by Senzui Kururugi to join the latter, but this request was met with rejection, putting the two of them at odds. 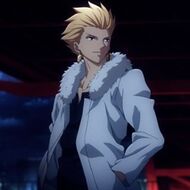 Hibiki's hair slicked back.
Add a photo to this gallery

"So it was you after all, Hibikkun."
"Who's Hibikkun supposed to be?"
—Hibiki responding to Raian.

Hibiki has an extremely apathetic personality, dismissing any sort of emotion as pointless banter. After having his only friends brutally taken away through murder, he assumes carelessness to prevent future suffering. He almost always has a simple careless face, no matter what the reason. Hibiki is extremely intelligent, more so than most of the other characters in the series. Because of this, he often passes the time with games of strategy involving riddles. His philosophy is focused on the fact that there exists no divine creator that is in complete control. Concluding this, there is no real purpose of action, and thus no truth to seek and uphold. Therefore, he will not hesitate to murder, lie, or commit any indecency under the knowledge that it is not wrong or right. This philosophy in turn allows him to be the judge of his own actions, deeming what is right and wrong using his own cultural and ethical presuppositions. He has a rather cynical and even misanthropic view of the world around him, but seems to only engage in belittlement of a person only when the said person has "prompted" it, as Hibiki puts it. Despite this, while he is relatively taciturn, he occasionally squabbles with and insults his teammates, especially in regards to Seireitou.

In his own words, Hibiki claims to be unaffected by any form of morals or ethics as he views them as mere restrictions on his potential. He is, therefore, willing to stop at nothing to further his selfish ambitions, including manipulating or killing anyone if he deems it to be necessary. Ideally, his most impressive feature coincides with his lack of guilt. He is truly an embodiment of deception and manipulation, as he has no bodily reflexes or moral guidelines that hinder him from lying. Such ideals carry into his way of fighting as well. He shows the same degree of ruthlessness to his foes, regardless of age or gender. In his eyes, only his goals are important and that, in his own words, among allies and enemies alike, nobody is promised to be safe from his ideals.

Despite his usual indifferent behavior, Hibiki is, as he puts it, "involuntarily stupid when around females." He seems to be unable to avoid flirtatiousness, and has been caught off-guard and weak-knee'd on more than one occasion. Even when maintaining apathy around them or ignoring his hormones, awkward scenarios seem to place him in uncomfortable positions. Hibiki also finds it difficult to engage in direct combat with females, but ironically, he has no problem killing them using alternative means. One of his hobbies is poetry, with the haiku being his favorite.

Immense Spiritual Power: Even before becoming one with the "Hell's Will", Hibiki had truly immense spiritual energy. It was because of that immense difference in power between himself and those around him, from childhood, that Hibiki always kept himself distanced from others. Now that he has attained the powers of the Kushanāda, his already incredible power has become much more vast. Kujaku Kuchiki commented that Hibiki's very presence is monstrously overwhelming. His spiritual power is green in color. With seemingly no effort on his part, Hibiki was capable of subduing Minato Kuramoto, Tōshi Kyōkaku, and Hake Getsueikirite from a considerable distance away. His spiritual power is strong enough to warrant an immediate release of Bankai from Raian Getsueikirite, and also strong enough to hold Seireitou Kawahiru at bay. Whenever his spiritual power as a Kushanāda is released, his eyes take on a light green color, and the coloration shifts to a darker shade of green with a slight golden hue.

Enhanced Strength: Hibiki is strong enough to, without much effort, contend with hundreds of Hollows in terms of brute strength, and come out of fighting without even a single scratch. Despite cutting through Hibiki's chest with his blade, swinging it with both hands, Raian was unable to do more than leave a small scratch on the former's chest.

Genius Strategist and Manipulator: Hibiki's knowledge is perhaps his greatest weapon, his intellect allowing him to completely undermine and humiliate his enemies without much physical effort. Because of this, he is an excellent battle and war strategist and can naturally takes charge of ideally any situation. Something that would be discrete to some about Hibiki is his ability to always be in control of any situation, remaining several steps ahead of the enemy. He often prefers to keep his enemy thinking that they have the advantage, while molding the situation unnoticeable. He often does this effortlessly, somehow saying or doing things that will get a precise and predictable reaction from his victims. This allows him to predict and foreplan a strategy to deal with the situation. He has employed his mastery of manipulation on many, on both foes and allies alike.

Possibly one of his most feared attributes is his level of speed, which is considered to be in a level of its own. He moves fast enough for it to be mistaken as teleportation, and can even preform near impossible feats. Hibiki can move at a velocity high enough to allow him to even leave slashes on opponents, only for those slashes to not be physically present until about one or two seconds after cutting them.

According to Hibiki, he is an avatar of "Hell's Will" (地獄の意志, Jigoku no Ishi), which refers to a contract forged between himself and the realm of Hell. He is able to call upon its power and turn it into his own, reigning the very nature of the underworld under his dominance, no different than a Shinigami subjugating a Zanpakutō spirit. For Hibiki, all of Hell can be considered his Zanpakutō. At any time in Hell, Hibiki can summon Kushanāda to his location almost instantly, and their numbers can range anywhere between one and a hundred. While in other dimensions, Hibiki can use the Enkaiō Sakeme in conjunction with this ability, to summon the arms of the Kushanāda to aid in his battle. He is also capable of absorbing Kushanāda to strengthen his reserves of spiritual energy, which also results in healing the former of all injuries.

Enkaiō Sakeme (塩化硫黄裂け目, "Brimstone Tear"): Hibiki can tear open a Garganta-like portal in any space he is in. Chains are seen inside the portal, which keep the portal open. He will then step inside the portal, which then closes, bringing him to any level of Hell of his choosing. Hibiki also utilizes this technique as a means of sucking in enemy attacks, and by summoning an adjacent portal immediately after the first one, he can redirect the attack in a direction he desires.

This character was written as a homage to the user, Echo Uchiha, an old friend of the author.

Retrieved from "https://bleachfanfiction.fandom.com/wiki/Hibiki_Asakura?oldid=431554"
Community content is available under CC-BY-SA unless otherwise noted.