Haruka Inori (春花祈り, literally meaning Spring Flower Invocation), usually referred to as Inori, better known by her nickname Haruin, was a meek yet powerful Shinigami with a tragic past better left forgotten. She was recently appointed Vice Captain of the Eight Division several years ago which was under the leadership of Erika Fujibayashi.

Haruka originally had a bright and burgeoning future as a Shinigami, having been awarded a Seated Position for her efforts. Things came full circle after she married an unnamed Shinigami and Haruka truly believed eternal happiness had been attained for the time being. However, fate played a cruel event on her and in an event simply known as Inori's Tragedy, everything came crashing down which resulted in the death of her husband and Haruka's mental breakdown. Utterly devastated, Haruka had consigned herself to a life of solitude, up until this day till she can come into terms with it.

Shikai: The release command of Jiyuu was Express (表す, Arawasu) 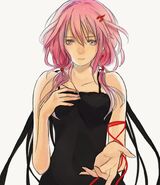 Retrieved from "https://bleachfanfiction.fandom.com/wiki/Haruka_Inori?oldid=407562"
Community content is available under CC-BY-SA unless otherwise noted.