Gekkō Kirameki (月光きらめき, Moonlight Shimmer) is a Soul who resides within the Reikai and is the Head of a small group of mercenaries known as the Akatsuki. He holds no allegiance to neither of the three great worlds nor participates in their petty conflicts. His goal is one that extends no further than saving his family from the Great Demon that dwells within their blood.

Gekkō has ascended to the rank of Hakuda Master not only due to his prodigious skill in the martial craft but also because of his absolute hatred for inefficiency, viewing it in the same lense as a farmer views a weed: something that needed to be rooted out less it sabotage everything one worked for. This attribute is what makes his standing as Clan Head of the Kirameki Clan all but a natural transition that he will thrive in without fail.

As a result of this, Gekkō meets any obstacle or task he encounters with almost inhuman precision and focuses to the point where He has been compared to a machine because of the way he maximizes his efficiency. His natural aptitude for just getting things done is unrivaled. Whenever a task is put in front of him, he compartmentalizes it, breaking the assignment down to even the smallest parts as though instead of simply completing it, he recreates it so that it may achieve the goal it was created for far easier. He does this by shifting his perception of the task from simply being something that must be completed to a tool that will be advantageous in acquiring his endgame.

This is even reflected in his communication, as he describes himself as being a fan of the "short and sweet" method of relaying his thoughts and ideas to both friend and foe alike. This ensures that there is no confusion or room for misunderstanding, knowing full well that even the slightest hesitation or mistake could result in severe consequences and casualties. This inevitably resulted in his subordinates admiring his method of leadership.

However, being efficient is not the only requirement one must meet to be considered a good leader. Gekkō would not be able to have made nearly as much progress or acquired the position that he did if he was plagued by self-doubt. This dates back to his childhood, as even then he was aware of the innate potential he had brimming within, it was not that hard due to the many praises he received for his accelerated development.

It should come to no surprise, then, that he holds great pride in the skills and abilities he has acquired over his lifetime. His ability to lead, to fight, and to master whatever is put in front of him, are all the result of his drive, determination, and sharp mind. This confidence is only bolstered by the knowledge that he had actualized his latent potential with his own two hands. Of course, he has had some guidance along the way, yet and still, he would not have gotten to where he is now had it not been for his hard work.

Hence, he trusts his own opinions and deductions more so than that of others. This trait materializes in his refusal to live and work by the conclusions those around him have come to unless they are founded on solid reason. Even as a child, Gekkō was much more assertive among his peers in the Shinō Academy, frequently going as far as to question his teachers and choosing rather undergo his methods of learning when the explanation from his mentors did not satisfy the rational mind of the young man had.

Even in the heat of battle, Gekkō has been noted to carry himself with a certain aura, projecting the certainty of victory regardless of what enemy he is facing. While most would find this, in and of itself, a flawed perspective that would lead to him being cut down, Gekkō's numerous victories have all but silenced such dissent. This has garnered him the respect of both his colleagues and superiors alike.

Due to his knack for exhaustively going over every detail of any assignment or task he is aiming to complete, Gekkō holds absolute faith in any strategy he comes up with. This aforementioned trait is his greatest strength, as he exhaustively considers every outcome and every possibility for any upcoming task or mission put in front of him. However, this same confidence is a slippery slope that can easily fall into arrogance. As this tendency to spend hours in preparation, to pore over all the information he has on the task at hand, is what leads him to completely dismiss any objections made by those around him.

This attitude does not square with the simple reality that defeat and failure, small or great, is inevitable. He refuses to acknowledge his small failures, let alone that they may be due to his actions or failure to receive what could have been valuable intel. This stubborn attitude leads to even greater failures that eventually cost him whatever goal he was trying to attain. His either inability or refusal to listen to other perspectives regarding his goal has garnered him more defeat than victory, so much so that his closest friends had to chew him out just to get him to consider another way that didn't fit perfectly into his plan.

Another well-known aspect of Gekkō's character is his determination, a trait that is so profound that it can easily be said that his powerful will is the source of every other facet he has. His efficiency's foundation lies within Gekkō's drive to see all things to their conclusion and to bring those things to their full potential. It empowers his self-confidence due to the repeated instances in which once he set his eyes upon a certain goal he will not stop until he achieves it. He is not easily discouraged from his goal, even if he runs into such an obstacle that there seems to be no way around it. This can sometimes come across to others as sheer bullheadedness, mindlessly pursuing an impossible goal.

This couldn't be further from the truth, as with everything, there is rationality behind Gekkō's actions. One of which simply being that if it was impossible, he would not have pursued it. It just so happens that what others see as outside the realm of possibility, is what Gekkō sees as an opportunity for growth and advancement. The second of which is the belief that with enough time and resources, any goal can be attained. This determination is often a self-fulfilling prophecy, as Gekkō will push through any opposing force with sheer willpower where others might give up and move on. This quality has led Gekkō to exhaustively master any skill he has taken an interest in, Hakuda being the best example.

In spite of his better self, Gekkō has been known to let his desire for efficiency bloom devolve into a full-blown obsession. This can also be said for his unwavering belief in the merits of rationalism; demanding an almost robotic mindset from his subordinates and colleagues. Personal circumstances are of no consequence to him, and he expects the same thing from those around him - nothing must distract from the goal trying to be reached, whatever that may be. Sensitivities are to be rooted out, as they leave room for emotional weakness and thus, serve as nothing more than a hindrance to what must be done. He has little if any consideration for the preferences of his colleagues, writing them off as irrational at best and irrelevant at worse.

Quite naturally, this mechanical mindset has all but alienated Gekkō from his emotional expression, as such he rarely knows how to handle them when they arise and will shut them away until a later time when he can "properly" let them out in the only way he knows how: training. While this saves him from being a hypocrite, not falling to the same "vices" he preaches against, this does not help the morale of the Corps at large. He will often trample on their feelings and hurt them emotionally, not because he wants to, but simply because that is all he knows: viewing anything that impedes his goal with scorn and cutting it out completely. This makes him ill-equipped to handle more emotionally charged scenarios and is quite possibly the reason he has only two true friends.

Gekkō's Full Appearance
Add a photo to this gallery

Hakuda Master: The idea of martial arts has always been fascinating to Gekkō; if not for the simple fact that turning the most readily available asset -- one's own body -- into a living weapon seemed far more reasonable than pursuing any other discipline found in the Zankensoki. As he grew older and his journey as a martial artist became to take form, Gekkō began to develop a genuine affection for Hakuda. Instead of viewing it as a means to an end, he began to truly embrace Hakuda as a way of life. This meant taking every opportunity to further hone not only himself as a Hakudaka but as a person. This seemed to not only provide great boons to his general prowess but also helped to quell the man's hot-headed nature, which allowed him to be far more perceptive of the situations he found himself in.

Gekkō's passion for the martial arts has physically manifested in the form of what most would call prodigious talent. Though Gekkō is no prodigy, he recognizes this phenomenon as a result of his senki (戦気, "martial spirit"). His pure drive to meet the next challenge, to test his limits and push himself beyond them as a martial artist has allowed him to develop at a superhuman rate......

Gekkō sending an average Shinigami flying with one kick

Gekkō deflecting multiple high-speed projectiles with ease.
Add a photo to this gallery

Masterful Reiatsu Control: Gekkō is a man who, above all else, values efficacy. One of the pillars of efficiency is not wasting anything that could prove beneficial to the desired effect. There is no greater resource than reiatsu. A commonly overlooked aspect that has been reduced to nothing more than the aftereffect of exerted reiryoku. For Gekkō however, it is an essential tool in his arsenal, a materialization of his will. 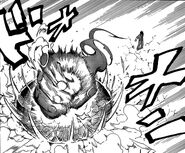 Gekkō's mastery over Reiatsu allowing him to materialize it to crush an opponent. 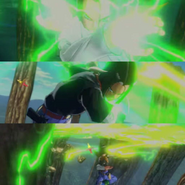 Gekkō's mastery his reiatsu enabling him to fire a Getsuga Tenshō 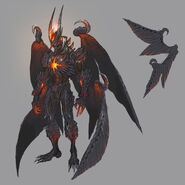 Gekkō transformation
Add a photo to this gallery

Retrieved from "https://bleachfanfiction.fandom.com/wiki/Gekk%C5%8D_Kirameki?oldid=438397"
Community content is available under CC-BY-SA unless otherwise noted.