Chouza Tenchijin (ちょうざてんちじん, Lit. Long Stay of Heaven Earth and Man) is a man who, quite simply, appeared out of nowhere and began methodically terrorizing Soul Society and the Human World. Multiple eye-witness accounts place him as Tenchū (天誅, Heavens Punishment) of the Kidō Corps; cross-examination shows that he was once a member of the Gotei 13 and had attended the Shinō Academy decades ago, but little more. Fortunate for him their is a staggeringly low amount of information confirming his identity, as a result little is known about the figure, his age, or his motives. He is regarded as a criminal and dangerous individual to all those he encounters, having harmed and killed hundreds without a shred of remorse, in addition to evading capture numerous times. He has a partner in crime known as Tenzin; together, the two go by the official moniker of the Wrath & Scorn (怒と嘲, Ikatochō), the name referring to the individual zanpakutō powers each possess.

Chouza is a very selfish person. He is acrid, greedy, and constantly shouts profanities and stands by what he believes without regarding others. He can be narrow-minded, extremely bitter, and violent without any provocation whatsoever, making his partner, Tenzin, insanely paranoid and apprehensive. It also strikes fears into those he encounters on a daily basis. He commonly barks at others, disregarded normal decency and becoming an untrained, uncouth savage; just like a beast in battle. A moment is never wasted as long as he can belittle the respect, and dignity of another; using trash-talk, convoluted schemes, diabolical strategy, brute force, or overpowering force to invoke a reaction. Simliarly, his ability to instill fear is unlike any other; it isn't in his ability or the dirty malicious stare that he makes, instead, it is in his ability to pick apart any situation. He can tear down anything and anyone given enough time, whether it's one enemy or a dozen enemies. His confidence breeds the mentality that he simply cannot lose, making him have a superior mindset that bests most people.

He is driven by his desire to reek havoc and nothing else pleases the sadist any more than that; therefore, even when standing before a clearly stronger opponent he shows no fear, and blows them away. Chouza can also be very dirty-minded person, viewing woman on an entirely different level than men - in fact, looking at them as if they are less intelligent species. In addition, along with this view of gender he thinks of woman as mere property and that he can do as he wishes with them. This is seen in his actions whenever he is near woman, and his inability to call woman by their actual name. In this regard, he is almost exactly akin to former Espada Nnoitra. His overconfidence, and stubborn attitude make him strong in battle, but immovable in his fight-plan and has led to his downfall many a time in battle. It is in this scenario that he begrudingly relies on his partner, Tenzin, to assist him. It may seem he does evil for evilsake, but quite the contrary, he does have a plan in mind that only he and his partner know of - a plan that involves that certain steps are taken, and certain people die. In this sense, it appears he is more intelligent and even methodical in his terrorist attacks, effectively crippling Soul Society in the long run. However, amidst his gleeful rampages of destruction and tyranny he has one thing that seemingly makes him different from other evildoers; he lacks empathy toward the good, has loyalty to some, and lastly, believes his actions are entirely justified.

Great Spiritual Energy: Chouza wields staggering amounts of spiritual pressure; exerting it with suffocating force and large power. From what has been seen the amount of energy within his arsenal is potent enough to do battle with his former colleagues in the Gotei 13 and cause much strife throughout Soul Society. Though his name is not widely known nor universally feared, the level of his spiritual energy is a strong force and should not be taken too lightly. Given that he can preform powerful spells that range from the eighties and lower, plus more secretive ranges of Kidō Corps magic confirms that his abundance of reiryoku is masterfully controlled and is used with amazing capacity. The feeling of the spirit energy is finely tuned, but can be very acrid whenever its exerted all the way. On a similar note, Chouza almost never releases all his spiritual pressure because of his knowledge of Kido, as no wise user of magic would preform such a questionable stunt.

Kidō Specialist: This character was once affiliated with the Kidō Corps, therefore his skill in this field of combat is thoroughly justified in his methodical terror attacks, and in actual battle scenario. He deploys magic with adept knowledge and tactical ability, weaving them with high offensive and destructive power that decimates opponents. Most spectacular of all, he's deeply engrossed studies have gifted him with terrifying prowess, reaching a level of skill worlds beyond what he should be capable of. He can cast multiple spells in succession to deal damage with little effort on his part - this is known as Quickened Casting. He can pull off magic well above the sixties, managing them and bundling them with others to dismantle, surprise, or simply blow his opponent away 'till their nothing but dust. The large assortment of spells in his arsenal, solely taught to the Kidō Corps also offer great creativity; mere inaudible utterances can light entire areas ablaze in wild blue flames, and capable of shooting off bolts of energy from every direction in sight. Even his more convenient spell set is quite destructive, setting an exemplary role for any shinigami wishing to become a terrorist solely based on magically skill. He refers to magic as an explosive art and no one has yet to correct him, not even his own partner.

Shunpo Practitioner: Sadly, he is the poorest excuse Hōhō has to offer and is absolutely no example of shunpo mastery, or even proficiency. The beautiful finesse of a clumsy giant is far superior to his skill; even the slowest and most stationary of battlers surpass his scope by leaps and bounds. Yes he can manage even the most basic concepts of movement, but little more, Chouza himself being a disgrace to speedsters of all race, kind, or breed. Although he has innate ability in all other areas, it seems that his speed is his single fallacy in his skill set. Very peculiar considering that he never once even attempted to further his studies in the area of shunpo, or try as much to have any professional teaching of some kind.

Skilled Strategist & Tactician: Chouza, being a very gifted terrorist is extremely perceptive, decisive, and quick. He can react immediately and come up with crafty methods and tactics to ploy through his opponent (and cause as much destruction as possible). By effectively using his knowledge he can confuse his enemies and turn the tide of the battle in his favor, no matter the odds against him. However there is much consistency with his many battle plans, and if fought twice, can be easy to pick apart. A skilled terrorist, he boasts innate knowledge in employment of ability and clever, strategic use of destructive abilities, in addition to geographical knowledge and distraction/diversion techniques; using everything and anything to his advantage whenever bombarding poor Soul Society or any other region. His tactics range from distraction, contingency, all the way to complicated plans involving enemy paranoia and fear-invoking strategies.

Ikusa no Kami (戦の神, God of War) is the name of the blade that Chouza wields. It takes the form of a standard katana with a darkened red hilt and an ordinary guard and pommel. He is a Melee-type Zanpakuto. 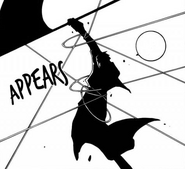 Unnamed Blast of Ikusa no Kami

Chouza killing off members of the Kido Corps.

Chouza watches on as his world crumbles.

A younger version of Chouza.
Add a photo to this gallery
Retrieved from "https://bleachfanfiction.fandom.com/wiki/Chouza_Tenchijin?oldid=408886"
Community content is available under CC-BY-SA unless otherwise noted.