Akira Sengoku (戦国明ら Sengoku Akira) is an Onmyōji and the 27th Head of the Sengoku Clan ever since his parents' passing under unknown circumnstances. He resides in Ikebukuro where his family operates, dealing with any and all spiritual disturbances. With the clan's operations straying from the average citizen's eyes, they reside with the front of being priests at Gokoku-ji Temple that is just outside of Ikebukuro.

Currently he attends Sugamo High School, juggling the responsibilities of an Onmyōji and student. As one with the the reputation of the worst delinquents in the school due to his looks and physiology, Akira has it rough. The many misunderstandings as well as his monstrous physical strength have labeled him the Rampaging Ogre (暴走オーガ Bōsō Ōga) or Ōga (オーガ Ogre) for short, much to his horror. All Akira ever wants is to be a normal high schooler and live a peaceful life.

In recent times, with the current destructive conflicts and world changing events happening all around the three core realms, it would seem he and just about every other Onmyōji will have to take action in order to preserve everyone's peace and existence. In particular, the Sleeping Dogs seem to target him and his clan.

Akira is, for his age, an extremely tall young man of 6 feet, with a narrow frame that clearly defines his muscles. Underneath the clothing, his slighly pale skin is lithered in scars from the harsh training his grandfather has put him in. Having inherited most of his physical traits from his mother, Akira has rather unique facial features (especially his eyes and expressions). His face has a well-defined jawline and a fairly masculine profile which, combined with his shaggy, blue hair and slated eyes give him the look of a delinquent.

His expressions are especially sharp and tend to be the main reason for his bad reputation. He generally keeps his face set in a near-permanent scowl, with his eyebrows drawn together, that tends to keep people away, except for his two best friends (who know the real him). However, when he finds something interesting or funny, a vicious grin would spread across his face (albeit unintentionally), intimidating or provoking nearly everyone around him. He's gotten into a lot of fights with the more aggressive students and upperclassmen, who seem to misunderstand him for being cocky.

During school time, he wears the male student uniform. The top consists of a dark blue jacket with a standing collar buttoning down from top-to-bottom. Pants are straight leg and a black or dark-colored belt is worn with them. He tends to wear white high tops for shoes. 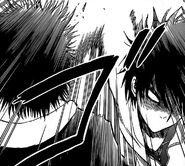 The Rampaging Ogre's in action...

Akira's reiryoku showing
Add a photo to this gallery

Itten (一天 Empyrean) is Akira's shikigami and a Holder Type. In her sealed state, she looks like a standard, though rather eccentric looking katana. It possesses white and black 12"(30cm) handle made of silk and a moderately curved blade with a length of 33"(84cm). The blade can be infused with reiryoku to cut through spiritual bodies like Hollows, although even while not using his spiritual power, Akira can easily pierce and cut through stone and even metal. The blade's sharpness and effectiveness can also be maximised if the Akira has better control of his reiryoku as seen with how Baiken was training him in better focusing it into the blade.

Retrieved from "https://bleachfanfiction.fandom.com/wiki/Akira_Sengoku?oldid=410262"
Community content is available under CC-BY-SA unless otherwise noted.