Aki Yamada is in the same grade an class as Sora Asakura. She is secretly in love with him and loves to spend time with him though she tries not to show it.

Has crimson colored eyes and long dark purple hair, which she usually keeps in a pigtail or ponytail hairstyle. Her most notable trait would be her small, oval shaped eyebrows. She usaually wears a short skirt and a long sleeved T shirt

Aki has a tomboy personaliy she argues with the guys in her school and even gets into fights with them. because she acts so much like a guy alot of the male students love to have her around. Around Sora Aki tries to act more like a girl hoping to get his attention. She is stubbborn and comes off as crud, disrespectful, and violent.

As a child Aki didn't have many friends and always played by herself. The other children would make fun of her odd shaped eyebrows. After Sora transfered to her school thruogh unknown events (coming soon) the two became extreamly close.

Sora Asakura: The love of Aki's life and the center of her world. Aki has known Sora since the two met back when they were 5 years old, evne back then she claims to have loved him. 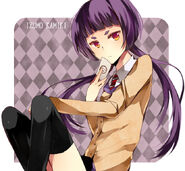 Add a photo to this gallery
Retrieved from "https://bleachfanfiction.fandom.com/wiki/Aki_Yamada?oldid=415205"
Community content is available under CC-BY-SA unless otherwise noted.