"She, who could never let go of the past."
—Kohta Hirano

Airi Minori (実=愛莉, Minori Airi, literally meaning Lovely Jasmine of Truth) was a Shinigami and a former member of the Gotei 13. She was widely known to be one of Kei's former flames, and the most psychotic of them all.

Once a Seated Officer in the Eleventh Division, Airi was slated to be one of the possible nominees for the coveted title of Kenpachi. However, Airi abandoned all aspirations when she met a young Kei Yume, whom she subsequently started to date and become lovers with. Although Airi reached a sense a happiness, it all came crashing down when she grew too needy and dependent on Kei, up to a point where her excessive desire for attention figuratively suffocated him. This, coupled with her obsessive tendencies led to the two's separation. Unable to cope and face Kei, Airi fled Soul Society for the Human World. With her mind in emotional turmoil, Airi's mental state became so warped and unstable, she believed killing Kei was the ultimate sign of affection and love.

Airi was an antagonist in Bleach: Tribulations, attempting to visit Kei on and off while he adamantly tried to avoid her. Her status as an antagonist was cemented when she managed to infiltrate Tougenkyou with the help of The Outsider and kidnap a depressed Kiyoko Takara, spiriting her away to a region of Hueco Mundo called Solitaria Llanos. Upon her defeat, Airi was sealed in a Kidō Coffin by Kei in order for her to reflect on her actions. She was later seen in Bleach (Kenji Hiroshi), although she was only referenced in name only. She is set to make a return in Bleach: Cataclysm, serving as an Antagonist/Anti-Hero to the Yume Siblings (Manami Yume, Chihaya Yume, and Mizuko Hoshiko-Yume), having recently learnt of their parental relationship to Kei Yume.

Airi was a stunningly beautiful young woman who appeared to be in her early twenties. She had long green hair that was strangely parted in the middle in two parts. The inner part reached down to her neck while the outer part curled slightly inwards at the tips before curling outwards again, where it reached her breasts. A large clump of hair covered her forehead in the middle, and several more smaller clumps also covered her forehead on her right side but not on her slightly parted left side. Airi usually wore a thin white ribbon at the back of her hair, which was held in a small ponytail that reached past the nape of her neck. Otherwise, the rest of her hair hung free, where it almost reached past her ankles. Her eyes were a bright emerald colour. One of Airi's most prominent features was an enlarged canine tooth found on the right side of her mouth. Airi also occasionally had a red camellia in her hair.

Prior to leaving Soul Society, Airi wore the standard Shihakushō used by all the Shinigami. Underneath her Shihakushō, Airi cosmetically wrapped her breasts in bandages, foregoing a bra. She also wore two white fingerless gloves to further differentiate herself from other Shinigami, namely those in the 11th Division. The only difference in Airi's appearance was a red bead scrunchy that used to hold her hair in a bob cut like fashion.

Prior to the Collapse, Airi's appearance was regularly associated with her Gigai. Her main attire was a deep red traditional Chinese shirt that had silver lining and two cotton balls tied around her neck. Her clothing was split into two at the end, having flame like patterns on both ends, which connected in the middle. At the back, the shirt stuck out like flames. Her sleeves were detached, and could double as gloves. They had blue patterns and were tied near her shoulders with blue string. Her skirt was composed of mink, and each pellet had a flame-like shape that stuck out everywhere. Airi wore thigh-high black stockings and bandages that were wrapped around them in a 'X' pattern. She wore ankle-high red boots to complete her outfit.﻿

Airi can be described as being similar to Nika because of her frivolous outward personality that hides a layer of cunning scheming. In a way, she is also similar to Yuuki Kaburagi, due to her obsession with her ex-lover, though she lacks many of Yuuki's redeeming traits.

Airi Minori came from an Unknown Family from the Rukongai, District 79. It was heavily implied by Airi that her family was deceased.

Spirit Taser: During her stay in the Human World, Airi was able to develop and create a specialized taser for use against Spiritual Beings. When used against a Shinigami, the Spirit Taser sent a surge of reiryoku towards the target's body, temporarily overloading the reishi composition of the opponent to a state of unconsciousness. The effect was said to last seconds to several minutes.

Jigenikou (次元移行, Dimension Travel): The Outsider blessed Airi Minori with a lesser variant of Jigenikou that allowed her to travel to/from dimensions such as Hueco Mundo, Soul Society, and the Real World with little effort. Due to possessing a weaker version of The Outsider's Jigenikou, Airi was unable to travel to Amenokai and its associated realms, namely Tougenkyou, unless helped by a Tenjin like The Outsider. Jigenikou was the ability that allowed Airi to kidnap the Substitute Queen of Tougenkyou, Kiyoko Takara, from her residence and spirit her away to a region of Hueco Mundo called Solitaria Llanos.

Enhanced Speed: Although Airi was a Master of the Shunpo Arts, she boasted an immense amount of natural speed. She was fast enough to bridge the gap between her and anyone who used Shunpo. Airi regularly used her incredible speed to her benefit, using various opportunities to misguide and strike her opponents at her own discretion. When used in conjunction, Airi was rumoured to be as fast as lightning.

Esusekai (エス世界, "Sadistic World") was the name of Airi's Zanpakutou. Esusekai originally took on the appearance of a standard katana during her as a Shinigami in the Gotei 13. Despite being a katana, its most notable trait was the curved blade. However, upon Airi's descent into insanity after breaking up with Kei, Esusekai's base appearance became distorted to better enumerate its master's deteriorating state of mind. Esusekai's current form resembled an over-sized cleaver; befitting Airi's nature.

Shikai: Esusekai's Release Phrase was Maim (切り放つ, Kirihanatsu). When released, Esusekai takes the form of a giant handled blade. It is difficult to describe; any descriptions refer to it as "a giant razor", or a "a blade-like weapon".

Shikai Special Ability: When released, Esusekai empowered Airi by the amount of pain caused in the world, leading her attacks to become stronger by any pain inflicted upon her or her foe. When Esusaki reseals, all damage is reverted. 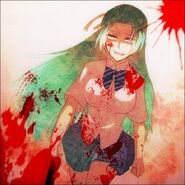 Retrieved from "https://bleachfanfiction.fandom.com/wiki/Airi_Minori?oldid=407458"
Community content is available under CC-BY-SA unless otherwise noted.